How a dictionary works

Generally, the words are organized alphabetically in a dictionary such as English to Bengali printed version to make it easily usable. As it has so many words, guide words are placed at the top of every page to assist you in finding a word quickly. Guide words indicate the first and last word of the page. You just need to look at the guide words and use your knowledge of alphabetizing the word you are looking for and decide if that word can be found on that page. Online dictionaries are easier because you just need to type the word in the search bar and press the enter key or click the search button for the meaning.

Mainly, dictionaries can be of nine types. They are as follows:

Bengali or Bangla language has a glorious history of around 1,300 years or more, and it is very versatile as a language. Its origin is in ancient Sanskrit language. Primarily, Bengalis in South Asia spoke this Indo-Aryan language. It is the national and official language of Bangladesh. Apart from this, it is the official language of India’s West Bengal, Assam, Tripura, and Jharkhand State. More than 300 million all over the world speak in Bengali. Now, Bengali is the 5th most-spoken native language and the 7th most spoken language of the world. According to Wikipedia, the Bangla Ovidhan lists 75 thousand separate words.

Bengali language has total 50 letters, 11 (অ- ঔ) vowels and 39 consonants. They are as follows: 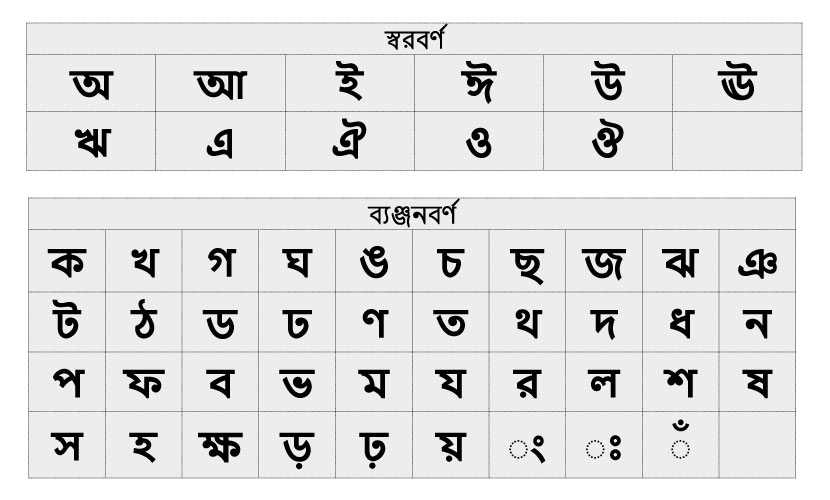 English is an international and global language. Its origin is in West Germanic language, and the people of early medieval England first spoke it. The name English is derived from the name of a Germanic tribe, Angles. The tribe migrated to Great Britain’s area and later took the name England. The origin of both these names is a peninsula located in the Baltic Sea called Angelia. Considering the number of speakers, it is the largest language and the 3rd most-spoken native language in the world. English is the most vastly learned as a second language and is either one of the official languages or an official language in around 60 sovereign countries. According to estimation, more than 2 billion people speak in English all over the world.

English language has total 26 letters, 5 vowels (A, E, I, O, U) and 21 consonants. They look different as capital or uppercase letters and small or lowercase letters. They are as follows:

Both Bengali and English languages have 10 numerical digits.

Dictionarybd.com is launched to be the best English to Bangla online dictionary for the Bengali language. We ensure the highest quality Bengali meaning for any English word. We also provide English to Bengali translations for easy understanding. We develop this online dictionary by following the international standard like other well-known online English dictionaries. Any user can directly look for a word by typing in the search box or from the browse page. Words are arranged alphabetically in the browse section.

As it is the online dictionary we are trying to add the maximum number of information about a word such as meaning with descriptions, English meanings, types, synonyms, antonyms, examples in a sentence, and many more.